(as opposed to angry dolphins which would be cross porpoises!)

I had a wonderful experience on Monday evening this week. We had an open invitation to men in the church to join together at a local hostelry for an evening – food and friendship are a great combination. Good food, good conversation, good evening. A great time.

But that was not the wonderful bit. That came when one of the blokes who came, Dave, put some crosses in my hand. I need to give a context…

For a while now I have wondered about what we can do as Christians when we see the impromptu memorials that spring up along our roads at the site where someone has tragically been killed. It seems to me that we have something to say and do. I have decided that whenever I see one (and if it is safe to do so) I will pull over and pray for that family. But I have wanted to do more.

So I thought about getting some simple wooden crosses and leaving them there with the flowers and other tributes with a simple message saying that I prayed for them and with the church’s contact details so that they can make contact if they wish. I am concerned that it does not look opportunistic or tacky, but want to be able to seek God’s blessing on people in those circumstances.

I mentioned this to my friend, Dave, who is a carpenter. (His firm is Nelson Woodcraft – not to be confused with woodcraft firms of a similar name. Other carpenters are available.) I was hoping that I may be able to go to his workshop some time and spend some time sticking bits of scrap wood together to make some crosses.

So I was blessed and touched when Dave presented me with two crosses and labels at the meal on Monday, when I had only mentioned the idea to him the day before! And he has thought about this. The crosses are in oak, a hardwood, because it will look better for longer when exposed to the elements and the labels, being hardwood, can be written on without the ink being absorbed by the wood and spreading. I would not have thought of these things. So thanks, Dave, that is brilliant. I hope it is a long time before I need to use one of them but will carry them in my car from now on. If you want to do the same, fantastic, just follow Dave’s advice and use hardwood. I intend to use a Sharpie permanent marker to write on the label (other pens are available!). 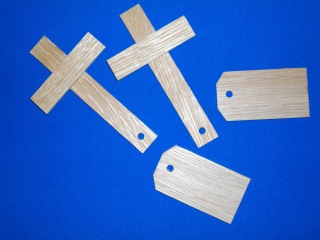 Bless you as you bless others

The following are all allegedly statements from insurance claim forms. We know what they were trying to say (I think)…


“The car in front hit the pedestrian but he got up so I hit him again.”
“I started to slow down but the traffic was more stationary than I thought.”

“I started to turn and it was at this point I noticed a camel and an elephant tethered at the verge. This distraction caused me to lose concentration and hit a bollard.”

“I saw a slow moving, sad faced old gentleman as he bounced off the roof of my car.”

“Coming home I drove into the wrong house and collided with a tree I don’t have.”

“A car drove away at speed catching our client who went up in the air and his head went through the windscreen and then rolled off at the traffic lights a good few feet away. The car then sped off and miraculously our client remained conscious and managed to cross the road.”

“I am responsible for the accident as I was miles away at the time.”

“I pulled into a lay-by with smoke coming from under the bonnet. I realised the car was on fire so took my dog and smothered it with a blanket.”

“I had one eye on a parked car, another on approaching lorries, and another on the woman behind”.

“On the M6 I moved from the centre lane to the fast lane but the other car didn’t give way.”

“On approach to the traffic lights the car in front suddenly broke.”

“I didn’t think the speed limit applied after midnight”

“I was on my way to see an unconscious patient who had convulsions and was blocked by a tanker.”

“Mr. X is in hospital and says I can use his car and take his wife while he is there. What shall I do about it?”

“No witnesses would admit having seen the mishap until after it happened.”

“I knew the dog was possessive about the car but I would not have asked her to drive it if I had thought there was any risk.”

“I pulled away from the side of the road, glanced at my mother-in- law and headed over the embankment.”

“The other car collided with mine without giving warning of its intention.”

“I was on my way to the doctor with rear end trouble when my universal joint gave way causing me to have an accident.”

“To avoid hitting the bumper of the car in front I struck the pedestrian.”

“My car was legally parked as it backed into the other vehicle.”

“I was thrown from the car as it left the road. I was later found in a ditch by some stray cows.”

Q: Could either driver have done anything to avoid the accident?
A: Travelled by bus?

“I collided with a stationary truck coming the other way”

“A pedestrian hit me and went under my car”

“In an attempt to kill a fly, I drove into a telephone pole.”

“I had been shopping for plants all day and was on my way home. As I reached an intersection a hedge sprang up obscuring my vision and I did not see the other car.”

“An invisible car came out of nowhere, struck my car and vanished.”

“I thought my window was down, but I found it was up when I put my head through it.”

“The guy was all over the road. I had to swerve a number of times before I hit him.”

“I had been driving for forty years when I fell asleep at the wheel and had an accident.”

“As I approached an intersection a sign suddenly appeared in a place where no stop sign had ever appeared before.”

“I told the police that I was not injured, but on removing my hat found that I had a fractured skull.”

“I was sure the old fellow would never make it to the other side of the road when I struck him.”

“The indirect cause of the accident was a little guy in a small car with a big mouth.”

“The telephone pole was approaching. I was attempting to swerve out of the way when I struck the front end.”

“The gentleman behind me struck me on the backside. He then went to rest in a bush with just his rear end showing. ”

“I had been learning to drive with power steering. I turned the wheel to what I thought was enough and found myself in a different direction going the opposite way.”

“When I saw I could not avoid a collision I stepped on the gas and crashed into the other car.”

“The accident happened when the right front door of a car came round the corner without giving a signal.”

“No one was to blame for the accident but it would never have happened if the other driver had been alert.”

“I was unable to stop in time and my car crashed into the other vehicle. The driver and passengers then left immediately for a vacation with injuries.”

“The pedestrian ran for the pavement, but I got him.”

“I saw her look at me twice. She appeared to be making slow progress when we met on impact.”

“The accident occurred when I was attempting to bring my car out of a skid by steering it into the other vehicle.”