(Blog one, get one free) 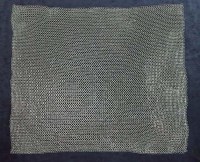 I promise I won’t normally post multiple blogs in one day, but as I on am leave for several days this week I thought I would stock up on posts now to avoid disappointment to my avid fan later.

On a visit to Colchester Castle today (well worth a visit) I was struck by the weight of Roman Chain Mail. No, not a parchment that says: “If thov fendeth not this miffive to XXV citizens thov fhalt be afflicted with the pox and bears fhall confume thy family” (or something vaguely latin and a bit leff Olde Englishe), I mean the chain mail vests that Roman soldiers would wear into battle. It weighed 40kg, which interestingly in Roman numerals makes it an XL! I reckon I’d have collapsed under the weight of it well before I saw any enemy.

The amazing thing about chain mail is that even though it is so heavy, it is extremely flexible by virtue of the way it is constructed. Each link is joined to those surrounding it and welded shut by hand. It takes ages to make. Each link is only as strong as those linked to it. You can draw from this all sorts of analogies about group dynamics and teamwork.

I won’t. I simply leave you with this story found (genuinely) in a Roman joke book (tenuous segue I know, but it’s the best I have):

A barber, a bald man and an absent-minded professor were taking a journey together. They have to camp overnight, so decide to take turns watching the luggage. When it’s the barber’s turn, he gets bored, so amuses himself by shaving the head of the professor. When the professor is woken up for his shift, he feels his head, and says “How stupid is that barber? He’s woken up the bald man instead of me.”

That joke resonates with me on many levels!