A Missionary friend of mine told me of an experience he had when he came back to the UK on his first home assignment from Indonesia.

He knew he would have to give talks about his work in churches and had taken many pictures of the village and people with whom he was working. This was in the days when slide projectors with a height of cutting-edge technology and he had a number of slides that showed the work that was being carried out among the indigenous people in the middle of the jungle. As he looked through his slides, however, he felt that they would be inappropriate to show to a church as the indigenous people for nothing by way of closing: the men wore a strategically placed gourd and the women a loin cloth. He did not want to offend people, yet a missionary must have some slides to show. What was he to do?

My friend had a moment of inspiration and placed small pieces of paper on the slides to preserve modesty. The natural static of the slides kept them in place so he happily selected the appropriate slides and put them in the carousel of his projector. When he arrived at the first church readiness to give a talk he checked and all was still in place. He began his talk and switch on the projector. Then he pressed the button for the first slide.

The slide appeared with the ‘modesty paper’ still in place, showing a black section on the screen. Then the cooling fan blew the paper off the slide! This happened on each side: the paper was in place when the slide appeared and then the fan blew it off. Far from preserving a sense of decency he had inadvertently created a strip show.

A student at Spurgeon’s College (where I trained, but this was not me) went to a church to preach but could not contain his nervousness. After the Church Secretary had given the notices and welcomed their visiting preacher the student stood up to lead the service. His nervousness did not diminish as he started and he fidgeted in the pulpit.

As he fidgeted his fingers found the back of a wingnut inside the pulpit and he twiddled nervously. Having something to do with his fingers seemed to calm him down. During the service and sermon he frequently turned the wingnut. He was pleased with the friendliness of the congregation, who were smiling warmly at him during the service.

A trainee Minister (again, not me) was understandably very nervous in taking his first wedding. It was an important day and he did not want to make any mistakes. He concentrated very hard as he led the couple through their vows, making sure that he read each line carefully before the couple repeated them. He got three live hours without any hitches and finally and triumphantly pronounced the couple, “Husband and wife.”

Which was fatal. The groom leaned forward and whispered, “Can I kiss the bride now?”

The trainee minister wasn’t really listening at this point and misheard. He thought the groom had made a very unusual but generous offer to him, so he leaned forward, lifted up the bride’s veil, and gave the bride a kiss.

Another student minister was preaching at a church in Essex. It was a warm summer’s evening and, as he began his sermon, he took off his jacket. Two lads sat near the front of the church started to giggle and point, but he refused to let them distract him and carried on valiantly even when they started to laugh.

At the end of the service he put his jacket on and said goodbye to folk at the door. Then he got into his car and drove home. When he got inside the front door he took his jacket off again as his wife came to greet him. She gave him a horrified look: “You didn’t take your jacket off at the church did you?” she asked.

“Look down!” said his wife, starting to giggle as she pointed at his white shirttails hanging out of his open flies.

At the end of a conference I attended we shared bread and wine in Communion. During the service there was a time of silent reflection. I was praying hard when someone’s phone went off. Ordinarily that may have been the cue for a round of serious tutting, head-turning and hard stares. Instead it led to an experience I can only describe as… brilliant.

The ring tone was Wallace (of Wallace and Gromit fame) saying, “No crackers, Gromit! We’ve forgotten the crackers!” It repeated several times before the owner of the phone was able to find it and silence it.

I was splitting my sides, trying hard not to laugh. The problem was that I could sense all those around me having the same problem. People were shaking silently all around me. Some had their heads in their hands, others were stuffing hankies in their mouths.

It got worse. Everytime I closed my eyes again and tried to be holy my mind replayed, “No crackers, Gromit! We’ve forgotten the crackers!” That led to me smirking and trying to suppress more sniggers.

It’s a line from A Grand Day Out – the first ever Wallace and Gromit film. 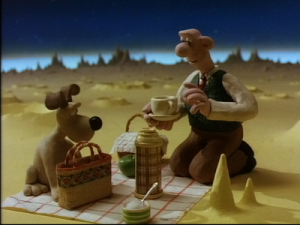 Eventually we calmed down a bit and got back to remembering what we were doing, even though Wallace kept coming back to me at different times. After the service I spoke with Viv, who was leading that part of the service, and asked if she had heard it. She had, and said she didn’t know what to do – to try to carry on or say, “Yes, it’s funny, we all have permission to laugh now.”

I wish she’d gone for the latter option. I have a feeling that the heavenly trilogy were having a good giggle – at the incident and at our efforts not to laugh out loud.

Perhaps the only thing that could have made it funnier would have been if we had been Anglicans or Catholics using communion wafers!