I am working on a sermon on the Beatitudes (the first part of the Sermon on the Mount in Matthew 5). As I am preparing I have noticed the breaking news that the European Court of human rights has ruled on the cases of 4 Christians who claimed that their human right to “freedom of thought, conscience and religion” had been infringed in different ways and that they had experienced religious discrimination. You can read about it on the BBC website here

With that breaking news in mind I re-read these words of Jesus: “Blessed are those who are persecuted because of righteousness, for theirs is the kingdom of heaven. Blessed are you when people insult you, persecute you and falsely say all kinds of evil against you because of me. Rejoice and be glad, because great is your reward in heaven, for in the same way they persecuted the prophets who were before you.”

First of all, and without wishing to trivialise the experience of those who have lost their jobs and felt so strongly that they wanted to take these issues to the European Court of Human Rights, I don’t think that these people have experienced the sort of persecution that Jesus had in mind when he spoke the beatitudes. Yes they must have felt terrible, yes they have probably experienced stress, yes they have probably experienced economic hardship but Jesus spoke in an era in which people would pay with their life for standing up against the authorities (and he did). He spoke in an era that not long afterwards would be throwing Christians to the lions. 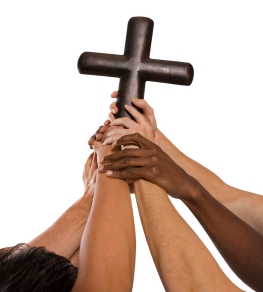 There are some who tell us that there is an anti-Christian conspiracy in this country, or that Christians are always being discriminated against, and I have heard the word ‘persecution’ used about this. I’m sorry, but no. The court decided that one of these four people had suffered discrimination but that is not the same as persecution. Persecution is what believers experience in countries where it is illegal to be a Christian, or illegal to become a Christian and where you may lose your livelihood, your reputation, your family and even your life. It is where you are in physical danger because you’re a follower of Jesus not where you are told you cannot wear a cross as a piece of jewellery.

In fact it is exactly the sort of thing I think we should be expecting to happen if we are living as countercultural followers of Jesus. Jesus did not promise his followers an easy life or that they would not encounter difficulties in trying to live out their life in a world that does not acknowledge him as Lord. Exactly the opposite is true. Picking up your cross daily and following him is not intended to be comfortable or easy.

The other thing that I struggle with is that Jesus’ countercultural response to persecution, even if what has happened to these 4 people could be regarded as persecution, is to rejoice and be glad not to go to court over it. It is to recognise that our inheritance is not in this world but it is “the kingdom of heaven”, the God dimension that invaded this world in the person of Jesus to reclaim it and us for the rightful owner.

I have mentioned before on this blog the wonderful old Christian lady I met in mainland China who had been a nurse in a mission hospital at the time of the ‘Cultural Revolution’. Each week soldiers would come to the hospital and beat the nurses, demanding that they renounce their faith in Jesus. One week it got too much for her and she said that she no longer believed. Once the soldiers had left she bitterly regretted what she had done and when they returned the following week for her colleagues she went up to them and told them that she had lied. She still believed in Jesus and loved him and no matter what they did to her they would never be able to beat that out of her. After that they left them all alone, realising that there was nothing they could do that would change their allegiance to Jesus.

As she told us the story her eyes glistened, tears streamed down her cheeks (and ours) and yet she smiled because she said she had been counted worthy of persecution on behalf of Jesus.