In previous years I have written reflections for Easter Week. This year I have something planned for Maundy Thursday, but as I am about to start a week’s leave and I try not to switch on my computer during times of leave in case I am tempted to work, I won’t be doing a series this year.

Today I want to celebrate the great British public. This is not a jingoistic, nationalistic, EU referendum-related post. It’s a celebration of how the public in this country can embrace the unusual.

The £200 million polar research vessel, which will be operational in 2019, is set to sail the waters of Antarctica and the Arctic carrying a team of 90 scientists and support staff.

In a statement NERC said: “Tonne-for-tonne, the ship – together with NERC’s existing two blue water research ships – will provide the UK with the most advanced floating research fleet in the world and will help put the UK at the forefront of ocean research for years to come.”

NERC was looking for a name to reflect the ship’s prowess in the oceans, symbolising the pioneering work they will undertake.

When thinking of submissions, they advised: “We’re looking for an inspirational name that exemplifies the work it will do.

“The ship could be named after a local historical figure, movement, or landmark – or a famous polar explorer or scientist…”

The NERC decided to put the naming of the ship to a public online vote, with submissions from the great British public. They were thinking of names like Endeavour, Falcon, David Attenborough and so on.

But the name that was put in as a joke and which is currently the runaway leader in the public vote is Boaty McBoatface. 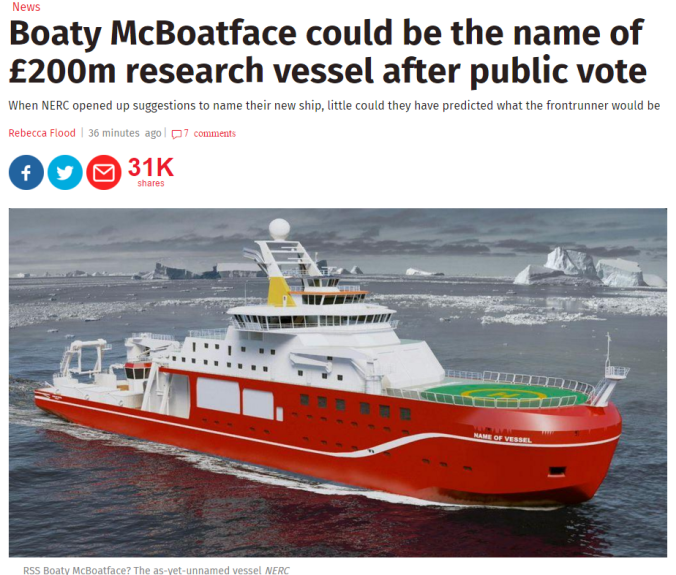 I love that. I love the idea that this amazing vessel could be sailing around the world called ‘Boaty McBoatface’!

However, there is one small problem. Hidden in the terms and conditions of the public vote is a small, but significant, clause reserving the right of the NERC to select the final name.

It did make me wonder whether we should be naming ships in the Royal Navy in a similar way. It could be a new weapon. Imagine a captain of a foreign ship about to engage in a battle with a Royal Navy ship. He picks up his big binoculars and focuses on the ship that is steaming towards him. Then he notices the name: HMS Shootyshootyfloatfloat.

The captain is unable to issue any orders because he is laughing so much and HMS Shootyshootyfloatfloat is victorious without a shot being fired.

Humour can be disarming, when used graciously. It can puncture pomposity. It helps people to look at things from a different perspective. It’s difficult to be angry when you’re smiling. I believe that it’s a gift from God, and we need to use it.

I hope that this week you find things and people who make you smile. With whom can you share the gift of humour? If you see someone who hasn’t got a smile, give them one of yours.