One of my friends and I are putting on a magic show on 23rd May. 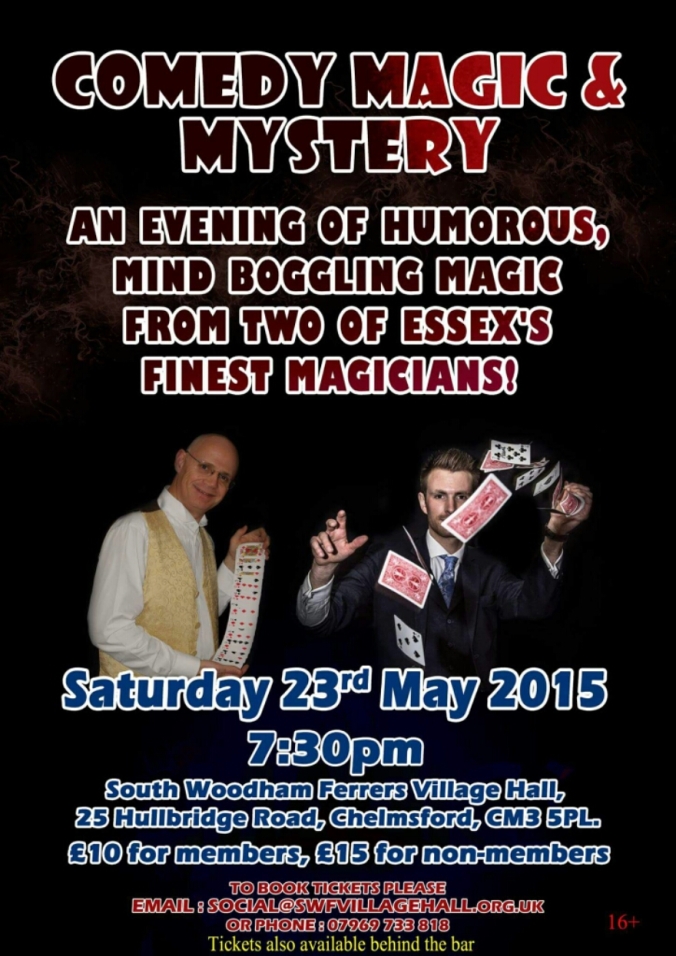 We had this poster created for the event (Richard is definitely one of Essex’s finest magicians: he’s a member of the Magic Circle –  I’d be happy to be known as one of Essex’s thinnest!) If you would like to come along there are booking details on the poster. I think it will be a great night’s entertainment, but then again I might be biased…

(Membership relates to the Village Hall – you can join for a nominal fee when you book, I believe).

Posted from WordPress for Android

I am feeling quite chuffed with myself because I have invented a magic trick. It is not something I have seen anywhere else: the only way to see it is to ask me to perform it for you. [pauses to wait for stampede of requests that doesn’t actually happen].

I call it ‘Mind Boggled’.

Now when I say I have invented a magic trick, I should say that it uses a pack of cards and they have been around for centuries. And it involves finding a spectator’s chosen card. Which is the basis of most card tricks. And it also involves a word game that I didn’t invent.

Before we get puffed up with pride and self-importance about our own greatness and achievements perhaps we should take a moment to reflect on those who have helped us. [cue award ceremony acceptance speeches]. Perhaps we should reflect too on the Creative One who has given us imaginations, cognitive ability, problem-solving skills and the materials on this planet to be able to make these things a reality.

So perhaps my ‘chuffed’ level should be downgraded from ‘quite chuffed’ to merely ‘chuffed’, or perhaps even as low as ‘a bit chuffed’.

But I will still perform the trick for you if asked!