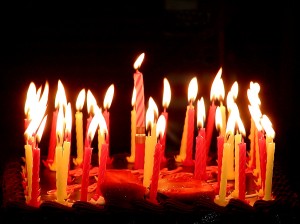 I am now an old geezer. A birthday has taken place that has moved me to a new status in life. It’s not my birthday: it’s the 18th birthday for number one offspring (aka Thomas). That means that I am now a parent of an adult.

Eek! I can feel the life and energy draining from me and I am already ordering my walking frame!

Of course that’s ridiculous. The turning of a page on a calendar from one day to the next does not suddenly make me ancient, nor does it suddenly and magically bestow adult maturity and experience on 18 year-olds. Why we think that someone who is 17 years 364 days old (even allowing for leap years) is unable to vote intelligently, will drink alcohol less sensibly and be unable to do any of the other things that an 18 year old can is beyond silly.

We all know of people who are old in years but immature in outlook, and younger people who are mature beyond their years. The young people at my first church gave me a keyfob (that I still use) that says, “I may be getting older but I refuse to grow up.” Despite this, we insist on treating people collectively. We have these arbitrary lines in our legal system because they have to be drawn somewhere. We are too big and complex a society to treat everyone as an individual: it is impossible to create a system whereby the maturity of individuals is judged more subjectively than by age alone.

Why is it that churches have adopted this mindset? Why do we group people and treat them as collectively coherent, coterminous and collaborative? So we talk about ‘young people’ or ‘children’ or ‘older people’ or ‘Christians’ or ‘non-Christians’ or ‘members’ or ‘congregation’ and assume that this means that they think the same thoughts, react the same way and relate to one another. Jesus refused to label anyone or put anyone in a box. Even those whom he described as ‘hypocrites’ because of their legalism (a self-selecting group for whom this was one of the defining characteristics) he still treated them as individuals, met with them and spoke to them in ways they could understand.

How differently would you explain your faith to someone who was incredibly wealthy from the way you would explain it to someone who is hungry? If you wouldn’t, perhaps you should realise that Jesus did! When he explained what following him looked like he used different images for different people. To some fishermen he invited them to become fishers of people. To a bright spark in the religious elite he spoke of being born again. To others he spoke of being part of his flock or receiving life in all its fullness. To an ostracised woman at a well in the heat of the day he spoke of offering living water. He spoke of getting great treasure and he spoke of being bread that nourishes the soul.

When I was little I was shown a diagram that had God on one side of a chasm, me on the other and the only thing that could bridge the gap was Jesus’ cross. And  I remember being told that being a Christian was about ABC – Accept Jesus as your Saviour, Believe that he is God’s Son, Confess that you have done wrong. And that was the good news of Jesus. All neatly packaged and explained in a cheesy tract.

I am not belittling those methods (much). I am certainly not denying the truth inherent within them. But if they are the only models we have, we are surely in dire need of a fresh inspiration from God’s Spirit and a release of divine imagination so we can communicate the good news of Jesus in different ways to different people. Why do we think that Jesus needed lots of different ways of explaining it yet we only need two? And why do we expect we are all supposed to be free samples of Jesus with a kaleidoscope of different experiences, personalities, vocabularies and skills yet deliver a monochrome message?

Apparently a true story of an inflexible approach and failure to communicate:

Last May a man living in Newton, Massachusetts received a bill on his as yet unused credit card stating that he owed $0.00. He threw it away. In April he received another and tossed that one, too. The following month the credit card company sent him a nasty note stating they were going to cancel his card if he didn’t send them $0.00.

In retrospect, he probably should have let them do that. Instead he called the company and was informed that (are you ready for this?) the problem was the result of a computer error. They told him they’d take care of it.

The following month he reasoned that, if other charges appeared on the card, then it would put an end to his ridiculous predicament. Besides, they assured him the problem would be resolved. So he presented his card for a purchase. It was declined.

Once again he called. He learned that the credit card had been cancelled for lack of payment. They apologized for (here it is again) another computer error and promised they would rectify the situation. The next day he got a bill for $0.00 stating that payment was now overdue. Assuming that this bill was yet another mistake, he ignored it. But the following month he received yet another bill for $0.00 stating that he had ten days to pay his account in full or the company would take necessary steps to recover the debt. He gave in. He mailed in a cheque for $0.00.
The computer duly processed it and returned a statement to the effect that his account was paid in full. A week later, the man’s bank called him asking him why he wrote a cheque for $0.00. He explained the problem at length. The bank replied that the $0.00 cheque had caused their cheque processing software to fail.
The bank could not process ANY cheques from ANY of their customers that day because the cheque for $0.00 caused a computer crash. The following month the man received a letter from the credit card company claiming that his cheque had bounced, that he still owed $0.00 and, unless payment was sent immediately, they would institute procedures to collect his debt.

This man, who had been considering buying his wife a computer for her birthday, bought her a typewriter instead.