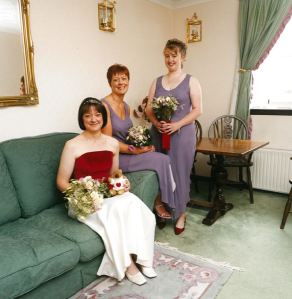 The bride, the bridesmaids and Mr Gruff (look closely)

A couple of Sundays back we held a wedding blessing in our morning service. It may be old hat to some of you to do things that way, but it’s not something I have ever done before. The wonderful couple [they read my bloggages so I have to say that ;-)] had been married 10 years ago in a civil ceremony but wanted to mark their anniversary by renewing their vows and recognising that God is now a part of their marriage.

I was not at all apprehensive about the service, but I did wonder how it would go – whether it would fit into a worship service and whether it would feel ‘right’. In fact it felt brilliant. It was an opportunity to thank God for all he had done in their marriage, to celebrate marriage, to think about relationships with God and one another.

In the sermon I commented on how, in their photos, a small bear called Mr Gruff was present. He had been there when D&S had met, he was there as their relationship blossomed, he was there at the wedding, he has been with them in their married life (good times and bad) and he was in church with us for the blessing too. He was also in every one of their wedding photos, but was mostly hiding in the background.

To me that seems like a lovely parable of how God is involved in our lives and relationships if we will let him. He’s there all the time. Sometimes we are conscious of him, sometimes it’s as if he’s in the background. Sometimes we acknowledge him and include him, other times he’s simply ‘just’ with us. Knowing that he is there is reassuring and encouraging.

Of course his preference is to be involved, to be acknowledged, to be engaged. But he is gracious and patient enough to be with us all the time, waiting for us to turn to him, to involve him once again and to include him in every aspect of our life.

He’s waiting for you now.

It was all too much for D…