One of the unanticipated side-effects of the expansion of the internet and the seemingly inexorable rise in online shopping is a corresponding rise in the number of delivery companies and vans. (If you want a tip for any spare cash you have hidden under the mattress (no, I am not a financial adviser so take this with a seriously large pinch of salt) invest it in delivery companies).

And as this becomes more and more commonplace, there are inevitable frustrations regarding deliveries that didn’t go well. Is it just me, or do other people think that sometimes the delivery people are trying their hardest to make it difficult for us to receive our parcels? On one occasion, when we were out, a well-meaning delivery man put the item in the green wheelie bin at the side of our house. There were two problems – it’s a long way down to the bottom of the bin so I couldn’t just reach in and get it, and also (retch) it’s the wheelie bin in which we put food waste and vegetation.

But something more annoying used to keep happening. I had installed a doorbell in our house shortly after we moved in and put the bell push on a wooden post to one side of the door to make it easier to attach. It’s not camouflaged, but you would think it was. There were so many occasions when deliveries were attempted and a card was pushed through the door saying that the item could not be delivered and was lobbed over the fence / with a neighbour / at the sorting office / other (*delete as appropriate). But on those occasions I was at home. And the doorbell is quite loud. They didn’t ring it. Instead the delivery people knocked on the door – presumably gently so as not to disturb me.

I know this is the case because on one occasion when I was at home a delivery person was just pushing the card through the door as I went past the door and I opened the door and spoke with them. They didn’t see the doorbell push.

So I decided that I would make it obvious for them. 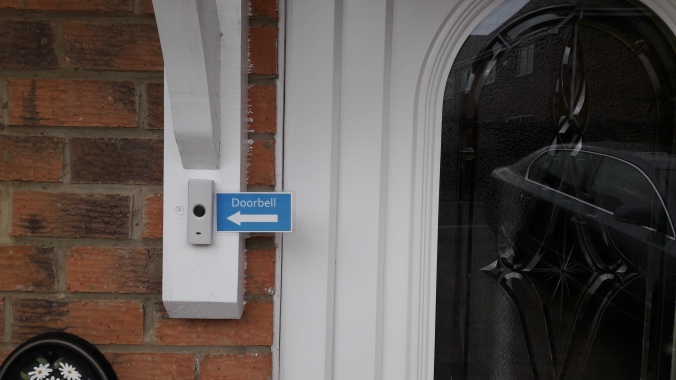 Of course we know that the delivery people are not trying to make things difficult for us. They are doing their best to get the parcels to their destination. There are times when they have delivered it to a neighbour several doors along the road, so they must have tried several houses before they got an answer. There are other times when they have found somewhere safe to hide it and left a detailed instruction on the card through the door. My favourite delivery person story is one who told my wife a joke when making the delivery as he wanted to deliver some joy as well as the goods. (It’s a visual joke so I can’t tell it here.)

I suspect that sometimes we can feel as if God is being as elusive / awkward / unhelpful as as delivery person. We ask him something and the answer doesn’t come straight back, or it’s not as straightforward as we want, or it even comes through someone else. It’s not that he is trying to make things difficult, though. I think it’s sometimes because what we ask for is more difficult for him to deliver.

We want courage so he gives us opportunities to be courageous.

We want peace, and while he may give us a sense of peace within, he may also provide us with people who will be with us in the lack of peace that we feel.

We want joy and he asks us to look for it in the little things of life.

The answers are there. God loves to respond. But for the response to make a difference he usually involves us (and others) in it.