For the first three days of this week I will be attending the Eastern Baptist Association’s Ministers’ Conference. I always find it a blessing when I attend these conferences – sometimes as much for the conversations between sessions as for the sessions themselves. This time we have some people I am very much looking forward to hearing God through – Rt Revd Stephen Cottrell, Bishop of Chelmsford, and ‘freelance community theologian’ Ann Morisy.

The reason I am telling you this, my dear bloggists, is not to make you jealous or to thumb my nose at you (metaphorically or literally). It is to alert you to the possibility that this week’s bloggerel supply may be different to whatever counts for normal. I don’t intend to be sitting in these sessions blogging away about what is being said. And I don’t know whether there will be opportunities for me to reflect to you what I have received during the course of the conference. Equally it is possible that there may be more opportunities than normal and I may serve you a series of bloggettes on which to snack during the day rather than the larger bloggages that I usually dispense.

This seems like a good moment to restate why it is that I spend time writing this bloggerel and posting it on t’internet. Initially I blogged for entirely selfish reasons: first and foremost because the discipline helps me to reflect on my life and faith. I find that God speaks to me as I write, or that writing down what he has already said to me helps me to understand it more. I also enjoy a laugh, chuckle or occasionally a groan and the bloggages give me an excuse to look for a joke that may be relevant, or to think humorously about something. And, if I am honest, I also find the gentle increase in the numbers of visitors to this blog simultaneously secretly gratifying and slightly bad for my ego in the same way that cream cakes are for the waistline.

All but the last could be carried out in private, of course, through a journal. But I am a man of the 21st century and the cyber world beckoned to me irresistibly. So I started posting online and heard from some of you that occasionally some of my bloggerel has been helpful to you too. For me that’s an added bonus, a blessing, a joy. So I now add to the reasons a more altruistic thought that God may bless someone through what I write, just as he spoke through inanimate objects like a burning bush and spoke through an apparently stubborn and disobedient donkey.

My prayer as I write is that this will not simply be a place where you visit and receive some blessing occasionally, but that it may inspire you to reflect on your own faith and life. You need not post it on a blog, but if you find that my ramblings have inspired you to think about your own relationship with God, or encouraged you to continue to try to be a good free sample of Jesus, then that thought blesses me more than anything.

So thank you for blessing me with your visit.

How many Baptist Ministers does it take to change a lightbulb? Change?

How many Baptist Church Meetings does it take to change a lightbulb? Six – mostly dedicated to talking about how good the old one had been.

How many Youth Ministers does it take to change a lightbulb? Who cares, anyone fancy pizza?

How many young people does it take to change a lightbulb? It wasn’t us, we didn’t break the old one.

Baptists don’t do bishops. Our ancestors got rid of them from their concept of church along with many other things that they disagreed with 400 years ago. Yes we have people in regional, national and international roles but they have no actual power over individual churches although we are blessed by having them. (I’m not just saying that because I used to work in the national office!) 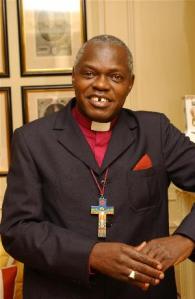 But this morning I was blessed immensely by the Archbishop of York, Rt Rev John Sentamu. Not in person, you realise! He was on ‘Pause for Thought’ on Chris Evans’s Radio 2 Breakfast Show. He was brilliant. He explained the incarnation and the meaning of Christ’s death and resurrection in just a couple of minutes and still managed to be engaging and approachable. Who else would have thought about combining the ‘Hongi’ Maori greeting (touching noses) with the Christian gospel? He is the sort of public face of churches that we need in this country, given that the media completely ignores churches that are not Church of England or Roman Catholic.

In the next few hours the show will be available to listen to again on the website above: I would encourage you to listen (it was on at about 9.20 am – drag the slider on the iplayer to about 2 hours 20 minutes if you don’t have time to listen to the whole show).

In the past I have described myself as ‘Ecumenically Promiscuous’* – meaning that I will work with anyone for the sake of the good news of Jesus. (*If you heard this phrase from John Baxter-Brown without him crediting me, now you know the origin!) If there were more Archbishop Sentamus I would probably be even more ecumenically promiscuous – finding it easier to work with Christians of other flavours because we are all united in proclaiming the good news. I also found myself thinking ‘I wish I was more like Archbishop Sentamu’. Then I realised that he is probably thinking ‘I wish I was more like Jesus.’

Yesterday’s post did not contain a joke and I received a complaint. Today I will remedy that by posting a ‘Bishop-related’ joke. It is clean but may cause you to groan: you have been warned! 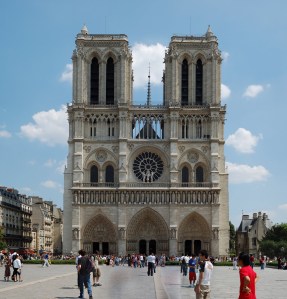 Following the death of Quasimodo. the Bishop of the Cathedral Church of Notre Dame sent word throughout the streets of Paris that a new bellringer would need to be appointed. The Bishop decided that he would conduct the interviews himself and went up into the belfry to interview the candidates. After observing several applicants demonstrate their skills he decided to call it a day when an armless man approached him announcing that he was there to apply for the post. The Bishop incredulously declared, ” My Son, you have no arms!”

“No matter” replied the man. He then proceeded to strike the bells with his face, producing the most beautiful melody on the carillon. The Bishop was astonished, believing he had indeed found a suitable replacement for Quasimodo. But in rushing forward to strike a bell the armless man tripped and plunged headlong out of the belfry to his death in the street below. The stunned Bishop rushed to his side. When he reached the street, a crowd had gathered around the fallen figure, drawn by the beauty of the music they had heard. As they parted in silence to allow the Bishop through, one of the number asked ” Bishop, who was this man?”

“I don’t know his name” replied the Bishop sadly, ” But his face rings a bell.”

The following day, despite the sadness that weighed heavily on his heart following the death of the armless camponologist, the Bishop continued his interviews for a bell ringer for Notre Dame. The first man to approach addressed him, “Your Grace, I am the brother of the poor armless wretch who fell to his death from this belfry yesterday. I pray that you will allow me to replace him.” The Bishop agreed to an audition, but as the man reached to strike the first bell, he groaned, clutched at his chest, collapsed, and died on the spot. Two monks, hearing the cries of grief from the Bishop at the tragedy, rushed up the stairs. “What happened? Who is this man?” they cried.

” I don’t know his name” exclaimed the distraught Bishop…