I realise that the way the media works is to give us soundbites and edited highlights in order to whet our appetite and get us interested in and raise publicity for their article, so I am trying to read this article (http://www.christiantoday.com/article/mark.driscoll.takes.aim.at.the.cowards.in.the.british.church/29159.htm) in the light of that.

But… honestly? Really? Why?

I suggest you read the article above before continuing reading this bloggerel as the rest of it may not make too much sense (or even less than normal).

Is there any point in making sweeping derogatory or even insulting statements about churches of which you have little or no knowledge? It may grab a headline, it may mean that lots of people will read the article but I would like to ask what the motivation was for the comments to be made in the first place.

It may well be that Mark Driscoll has some helpful insights to offer from his own experience in leading a church that is engaging with contemporary culture. But if I’m honest all he has done is raise my hackles and make me less likely to hear God speak through him to me. It may be that what he has said has been taken out of context, or he may even have been misquoted, if so then the journal in question owes him and us an apology.

Let me analyse some of the problems with what he has (allegedly) said:

I do not recognise the cruel and inaccurate generalisation of British clergy as “guys in dresses preaching to grandmas.” It is a cute quote and a pithy soundbite. But it is also a cheap shot and inaccurate for many reasons: for a start he is excluding a whole gender of people whom God has called into ministry; secondly there are many churches in which the clergy do not wear robes, and there are plenty of American churches in which the clergy wear robes (hasn’t he seen pictures of Rev Lovejoy in the Simpsons?); thirdly there are many people of all generations who attend British churches. Perhaps the only accurate aspect of this statement is that dresses are worn… by some female clergy (and probably grandmas). I have only worn one once in a pantomime and once when I was kidnapped by friends on the eve of my wedding and forced to wear one. No grandmas were preached to on either occasion!

He is also quoted as describing British preachers as “a bunch of cowards who aren’t telling the truth.” Words fail me (perhaps I should be more courageous and say what I really think!). Does he really believe that? How many sermons has he listened to in order to come to this conclusion? How many people has he shadowed in order to see that they lack courage and tell lies? How does describing a whole country’s clergy in this way fit with Paul’s injunction to the church in Thessalonica to “encourage one another and build each other up”? None of the preachers I know lack courage, and all endeavour to be honest and speak the truth. Perhaps the person on the other side of the Atlantic making the sweeping generalisation in print is not speaking the truth?

The article also quotes him highlighting that there isn’t “one young, good Bible teacher that is known across Britain.” Since when did fame and age come into any biblical description of the qualities for a preacher of the word? Perhaps I’ve misread Paul’s letters to Timothy?! And I would like to know what the criteria are for being a ‘young, good Bible teacher’… who is the arbiter of what is good? Who decides whether it’s biblical? Will we have do have a new reality TV show: “Preacher’s got the X-factor, get me out of here!”

I hope these quotations have been taken out of context because I struggle to believe that any fellow Christian, particularly one with such a high profile, could deliberately insult and undermine their brothers and sisters in Christ in such a way. And this is actually my main problem with the article. I wonder how a gifted communicator like Mark Driscoll can expect his message to be heard and received when he articulates it in such inflammatory and unpleasant ways. I have not heard him preach (so I could be wrong) but I seriously doubt that he insults and runs down his congregation in this way. I don’t know of any people who have been insulted into the kingdom of God and imagine he is a far more savvy and sensitive communicator than that in his church. So why is it all right to so ungracious in print to a whole country?

I am trying (and probably failing) to be more gracious than the article is in this bloggage. And I do want to try and learn something from this, so here goes: Please let me know if I am ever insulting or unpleasant in the way I communicate with you. If I make sweeping generalisations you have my permission to point out the error of my ways. And if I am ever guilty of saying or writing something unkind in a controversial headline-grabbing way please, please, please tell me immediately. Tell me (graciously) if I lack grace.

I remember a tutor at Spurgeon’s College, the vicar factory responsible for unleashing me on the world, encouraging me to be winsome with words. Please God, make it so.

“… Maybe you should listen more to what people are saying about you!” 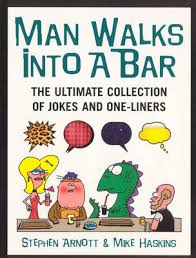 Regular readers will be delighted to know that this Christmas I received two joke-related gifts. One is a calendar with a new joke every day, and the other describes itself as “The Ultimate Collection of Jokes and One-liners”. WOOOO HOOOOO! The book is categorized and here is one I found:

Insults:
When God made him he should have kept the mould and thrown him away.
Whoever told you to ‘just be yourself’ gave you the worst advice ever.
You have an inferiority complex – and it’s not very good.
You say you are a self-made man? Good of you to own up and take the blame.

These are from the joke book. There is something delicious about a good insult. I know that we should not insult other people and that we should seek to bless and build up rather than tear down and insult, but perhaps that is why I find them so enticing. It’s like the old catchphrase for Cream Cakes – they’re naughty but nice.

Some of the best are wickedly funny (in both senses of the words).
“There’s no beginning to your talents.” (Clive Anderson)
“He is a modest man who has a good deal to be modest about.” (Winston Churchill)
“God could use you for miracle practice.” (Anon)
“You are drunk Sir Winston, you are disgustingly drunk.” “Yes, Mrs. Braddock, I am drunk. But you, Mrs. Braddock are ugly, and disgustingly fat. But, tomorrow morning, I, Winston Churchill will be sober.”

So I have a guilty secret. I find well-crafted insults quite amusing.

When they are written down.

The problem comes with being on the receiving end of such a comment. It could be devastating. Especially if everyone finds the insult as amusing as I do and laughs – that compounds the misery of the insulted person. That stops them being funny. That wipes the humour away.

Jesus got close to insulting people when he described Pharisees and Teachers of the Law as: “Whitewashed tombs”; “blind guides” (Matthew 22). How did they feel being on the receiving end of his tirade? How would I feel if he aimed the same sort of accusations at me?

The problem is that he reserved his anger and these semi-insults for the religious establishment. As a Baptist Minister I guess that includes me today. What would he say to the religious establishment now? Do we still neglect those he wants us to love? Do we still focus on keeping up appearances? Are we more concerned about our reputation than about his good news? Do we spend more on maintenance than mission?