Is it acceptable to give up giving things up for Lent? As today is the first day of Lent I have seen and heard of many people who are giving up Facebook, chocolate, crisps, TV, and even grumpiness for Lent.

Sometimes I have been told these acts of virtuousness by people who have then asked me what I am giving up, with the expectation that I will be. “Give up coffee,” I was told today. The pressure to conform is strong. But my nonconformist roots are stronger so I will not be giving anything up (although I will try not to be too grumpy) both because Lent is not something nonconformist Christians have gone for as wholeheartedly as the Established Church, and because I don’t like being told to do something. (An interesting observation from a fellow Baptist Minister today was that we make a lot more of Advent than we do of Lent. Hmmm what does that say about us?)

When I was a teenager, and then later as a Youth Minister, I was encouraged / would teach that young people should resist peer pressure: “Just because everyone else is doing it, it doesn’t mean you should.” Now there is truth in that when what they are doing is less than godly, but I think there is also an element in which peer pressure is positive.

In church we encourage one another to keep going in the faith. In society, the general peer pressure is to conform to levels of decency and behaviour that tend towards a stable country and well-being.

But how do you discern between good and bad peer pressure? What makes one good and one bad? When is being lent on something to welcome and when is it something to resist?

I think the answer is in Colossians 3 (look it up!). Remember that this letter was written to a group of Christians, not an individual. The negative and positive peer pressure is to be exercised collectively, not on our own!

See if you can work out why this is a good joke for this season:

A mechanic was removing a cylinder head from a car engine when he spotted a well known heart surgeon in his garage. The surgeon was waiting for the service manager to look at his car.

The mechanic shouted across the garage, “Hey Doc, can I ask you a question?”

The surgeon, a bit surprised, walked over to the mechanic who was working on the car engine. The mechanic straightened up, wiped his hands and said, “So doc, look at this engine, I open its heart, take valves out, fix them, put ’em back and when I finish, it works just like new. So how come I get such a small salary and you get the really big bucks, when you and I are doing basically the same work?”

The surgeon paused, smiled and leant over and whispered to the mechanic, “Try doing it with the engine running.”

Very quick lunchtime blog today as I am almost overwhelmed by stuff I have to get done.

Yesterday I was at an inspirational conference about how churches respond to the Big Society agenda. It was delivered by Steve Chalke and gave us lots to think about. At the end of the day there was a panel discussion with Steve Chalke, Bob Russell (our local MP), one of our Councillors, a Christian businessman, a youth worker, and, erm, me. I found out at the moment the panel was invited to sit at the front. Short notice or what!? Thinking time was virtually zero!

Today I prepared for a regular meeting at our church, went to the church and discovered that the meeting was not happening. I should have checked our weekly notice sheet. D’Oh! I am annoyed with myself but now have the talk I was going to give ready to roll next month! Over-prepared!

For me as a minister the biggest problem I have is making sure I leave myself enough time to prepare well for what I have to do. I hate ‘flying by the seat of my pants’ although I do find that when those moments occur God is gracious and helps me out. I hate rushing out of the door with the ink still wet on what I have prepared. I like to take a relaxed approach to preparation. I have taken to putting preparation time into my diary, but know that I am sometimes more generous in giving it away than I should be.

So how do you prepare for what God wants you to do? Do you arrive at the next thing and ‘wing it’ or have you spent time asking God what he wants from you?

Unrelated joke:
“Doctor, Doctor, I think I am a labrador. I slobber and dribble everywhere, I chase sticks and I walk round in circles three times before I lie down in my bed.”
“Well, lie down on this couch and we’ll talk about it.”
“I can’t. I’m not allowed on the furniture.”

I have always been fascinated by Jesus ‘sweating blood’

39 Jesus went out as usual to the Mount of Olives, and his disciples followed him. 40 On reaching the place, he said to them, “Pray that you will not fall into temptation.” 41 He withdrew about a stone’s throw beyond them, knelt down and prayed, 42 “Father, if you are willing, take this cup from me; yet not my will, but yours be done.” 43An angel from heaven appeared to him and strengthened him. 44 And being in anguish, he prayed more earnestly, and his sweat was like drops of blood falling to the ground. (Luke 22, NIV 2011)

One is that it was in praying that Jesus sweated blood. Even after he had been strengthened by an angel! He had willingly submitted to the awful, terrible events that he knew lay ahead – the ‘cup’ from which he had to drink. He prayed in the same way that he taught his followers: “Thy will be done on earth as it is in heaven.”

I’ve never been that passionate in my praying that I have worked up much of a sweat, never mind sweating blood. Jesus knew that to face what lay ahead of him he had to lay it before his Father in prayer.

The second thought is that these were the first drops of blood that he shed for you and me. In the Last Supper he took the cup after supper and declared that it was “the New Covenant in my blood, which is poured out for you.” (Luke 22:20) Even before the flogging, the crown of thorns, the crucifixion and the spear thrust into his side, Jesus began pouring out his blood for us – in prayer. His resolve was strengthened, his commitment to us affirmed in that moment.

It is an incredible privilege that our prayers are heard in the throne room of the Universe. Jesus’ praying in Gethsemane, the ‘place of the olive press’, when he was under intense pressure, reminds me that I can take it for granted and take it too lightly. I can never be too passionate about praying!

The musically literate will have recognised the opening to the Queen / David Bowie song Under Pressure. That is how I feel today following the visit of over 100 extra people to the blog yesterday as a result of the pages being mentioned on the BUGB E-news sweep (see yesterday for link). I feel that I need to raise the standard of blog entries (or at the very least not let the standard drop). And so I am under pressure (plink plink). 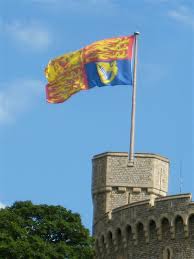 Of course some of you will be thinking that it shouldn’t be too difficult to raise the standard of the blog entries, given the starting level, and that may be fair comment. But feeling the pressure (pushing down on me) is mainly because I am not sure what a raised standard looks like (except for the obvious – see picture) or how to achieve it. What one person may think is good may make someone else groan. Or what one person finds helpful may annoy the pants of another (hopefully you will not be ‘sans pants’ today).

If I can do that there is no pressure. I can chill (ice, ice baby)*.

*I am very sorry for that last comment, I consider Vanilla Ice’s version to be close to sacrilege, but I could not resist!

Cartoon is used by permission and is Copyright Gospel Communications International, Inc – www.reverendfun.com