I almost removed myself from cyberspace this week.

First of all there was all of the TalkTalk panic. I am not a customer of theirs, but the fact that a company could be hacked and sensitive details taken is scary.

Then there was a moment during my week off when I gave into temptation and looked at my work emails. I actually needed to because there was something urgent and important that it was helpful to see but afterwards I was disappointed with myself for lacking the self-discipline needed not to look. Not being online would have been easier.

Then there was another hacking scandal.

And then, and this was perhaps the most significant, there was a lot of being told what to think by Christians. For some reason a lot of Christians decided to denounce Halloween this year. It happens every year but this year it felt a bit more judgemental. My Facebook feed seemed to be full of Christians quoting Bible verses that said it was evil, proclaiming that Halloween was the start of a slippery slope to satanism, saying that Jesus would not celebrate it, that you couldn’t be a proper Christian if you celebrated Halloween and so on. It almost felt oppressive (ironically).

Now before some of you unfriend me or unsubscribe to this blog because of the above paragraph let me emphasise that this is not a pro-Halloween comment. Neither is it an anti-Halloween comment. It’s a comment that is asking for a little less vitriol and a lot more grace in how we communicate with one another, especially on social media in view of the fact that a lot of not-currently-Christians will be reading those comments. I wonder how many of them will decide that they want to follow Jesus as a result of those comments?

Polemic and vitriol has a tendency to polarise and antagonise. By all means take your faith seriously. Definitely seek to discern what God has to say about life, the Universe and everything (it’s more than 42). And it’s good to tell other people what you believe (the Bible rather encourages it). But there is a difference between telling people what you believe and telling them what they have to believe. There’s a difference between sharing your faith and imposing your dogma. And, dear Christians, let’s try to work out what’s essential to believe to be a Christian and what isn’t. Be certain about the former, but be gracious how you share it; and certainly be gracious about the latter.

Christians sometimes pay more attention to the Ten Commandments than the Sermon on the Mount. On the basis that we pay most attention to what is written on tablets of stone Jesus has sent another stone tablet… 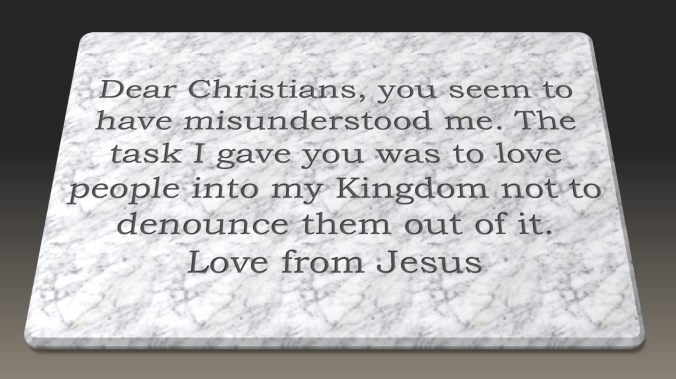