For those who read my bloggage about the Foodbank debate in parliament you may be interested in what the former Archbishop of Canterbury, Revd Dr Rowan Williams had to say about this. I have tried to go back to the source of the reporting rather than any of the politically aligned national press coverage – http://www.cambridge-news.co.uk/Cambridge/Cambridge-University-college-Master-Rowan-Williams-criticises-Iain-Duncan-Smiths-disturbing-remarks-about-foodbanks-20131224060424.htm

Warning. This bloggage may start off a bit warm and fluffy but it has teeth!

Tomorrow I will be performing some of my tricks for a party for people who are being blessed by the local Christians Against Poverty team. They are great people, and so are the CAP team! CAP works “to lift people out of debt and poverty. We offer free debt counselling through a network of 239 debt centres based in local churches.” (from their website)

“That this House notes that the number of people using foodbanks provided by the Trussell Trust alone has increased from 41,000 in 2010 to more than 500,000 since April this year… and further calls on the Government to bring forward measures to reduce dependency on foodbanks, including a freeze on energy prices, a water affordability scheme, measures to end abuses of zero hours contracts, incentives to companies to pay a living wage and abolition of the under-occupancy penalty.”

There was also call for an inquiry into the circumstances that had led us to this situation in our society. 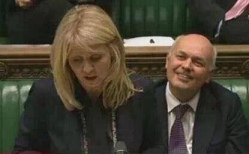 Regrettably, or (in my opinion shamefully) the Government voted against this motion. There were some scenes during the debate that made me ashamed. Government MPs shouted, ‘hooted’ and ‘brayed’ as the motion was being put (it was proposed by Labour). Responses from the Government were not delivered by the Secretary of State Iain Duncan Smith (who left before the debate had ended) and were at best evasive and at worst wrong (Esther McVey the Government Minister in her response said that there were only 60,000 Foodbank users, for example). Worst of all was when MP’s on the Government benches were actually laughing out loud when a Labour MP was saying that some people were so poor that they were fighting over the discounted items in supermarkets. The Mirror newspaper got rather upset.

The motion was defeated. If you want to know who voted against it, there’s a list here. I am sad to see that my local MP, Sir Bob Russell, was among them. (For clarity and by way of balance I would like to make it clear that he was not involved in the behaviour above, and is a supporter and Trustee of our local Foodbank. His reasons for voting against the motion were to do with the party political nature of the motion.)

The official line from the Government was to ‘welcome’ the rise in Foodbanks. And that rather missed the whole point of the debate. Yes, it is good that people are rising to meet the challenges of poverty and debt in our society (and many are Christians). But rather than welcoming the rise in charitable support why isn’t our Government addressing the causes of this increased poverty? And if there were some aspects of the motion that the Government felt they could not support, why not put in an amended motion that at least addressed some of the issues or promise to do some things to address the issues raised?

If an MP’s house had a gas leak would they open the window to get rid of the smell of gas or would they sort out the problem at source? Well, in my personal opinion, something stinks in our society and those who can do something about it seem content that charities just open the windows and decided not to address the leak.

This is not a party political issue. To amend something I have said before on this bloggage –  when Jesus said, “You will always have the poor with you” the correct response is not to jeer, bray, shrug your shoulders and blame someone else it’s to join forces with those who say, “Challenge accepted!” and do something about the causes of poverty as well as treating the symptoms.