Those of you who are unfortunate enough to be regular visitors to this blog (and the fact you keep coming back suggests that you are doing it deliberately as opposed to those who have stumbled on this repository of bloggerel on t’internet) will know that from time to time I like to invent words. I have created such marvels of the English language as ‘ambitextrous’ – able to text with the thumb from either hand and ‘technoloiterate’ – comfortable hanging around with technology. And of course the words ‘bloggage’ – an entry on my blog, and ‘bloggerel’ – the words and content that comprise an entry on my blog.

Today I introduce you to the latest word to come from my confused mind: ‘ambisomnorous’. I will leave you to work out what you think it means whilst I tell you a little story.

At the beginning of August I had some minor surgery on my right shoulder. It is getting better but it is not yet completely pain-free. There are some things I still cannot do (for example, my golf clubs have lain undisturbed for the last couple of months – and probably grateful for the lack of mistreatment). But the most frustrating thing that I’m not yet able to do is sleep on my right side. That is my favourite side to sleep on.

I don’t think I’m alone in having a favourite site to sleep on, am I? I don’t know why it is but I prefer to sleep on my right hand side. It’s not as if I can’t sleep on my back or my left hand side but if I’m on my back I’m more prone to snoring (apparently, although I’ve never heard it myself so I can’t be sure) and if I am on my left side but somehow doesn’t feel as right (pun intended). 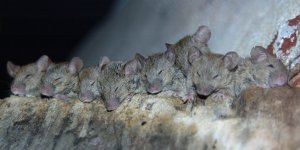 To provide some internet balance against all of the cat photos…

As I was lying awake last night musing on this the thought occurred to me that there must be some weird people who are actually capable of sleeping on either side without a preference. I have decided that these people are ambisomnorous.I have checked on a well-known search engine and it does not have a record of this word existed before today so I am claiming this as a new English word. When the Oxford English Dictionary finally get around to include it in one of their editions they will reference this bloggage is the first incidence of the word being used publicly.

I suppose alongside ambisomnorous should be ‘monosomnorous’ – someone who can only sleep on one side and ‘monopreferosomnorous’ (which is what I am).

As I was dropping off to sleep (on my left hand side) following these musings I reflected on two things: first of all my brain goes to some very strange places when it’s half awake (and/or half asleep); and secondly I was reminded of a paraphrase of a Bible passage that I wrote recently:

“When I think about how I’m made I tremble in wonder.”

That’s not big-headedness, it is giving credit to the imagination and skill of the Creator.

“Have you ever had the feeling that you have forgotten something important but can’t quite put your finger on it? It’s quite unnerving. It nags away at you. It niggles in the back of your mind. Even more unnerving is when you finally remember what it was when you wake up in the middle of the night and have to work out what to do about it. Do you hope you will remember when you wake up, roll over and go back to sleep? Do you write yourself a note and then go back to sleep? Or do you do something about it then and there?”

Cue gratuitous cute kitten picture because that’s what the internet is for, apparently:

This is how I began an email that I sent out today. Each week one of the Regional Ministers in our team will write a ‘thought for the week’ and send it around on a Thursday to all of our Ministers. This week it was my turn and, despite having a reminder in my diary, I forgot. Yesterday I had a sense that there was something I should have done, but I could not remember it.

I did remember it at 4 o’clock this morning. I was left with the dilemma above and decided that, because I was awake, I should write it then rather than wait until later this morning when I might have forgotten it again. I also decided that I would use my memory lapse as a ‘way in’ to the thought (which I have set out below in case you are interested*).

Once I had written the ‘thought’ and added items from the prayer diaries from across the Association I selected the email address groups and hit ‘send’. I relaxed and was just starting to get my head around the idea of going back to bed when my email program splurged out an error message saying (rather bluntly) that it had stopped. It then flashed up a message saying that it was trying to restart.

I didn’t want to have to rewrite the email. I didn’t think that in my semi-conscious state I could remember what I had written – certainly not in the same way.

The program restarted and I anxiously opened the ‘Drafts’ folder to see if any remnants of my work had been saved.

I could just about remember what I had written in the previous five minutes so I re-wrote those bits, saved the email, added in the addresses again and clicked ‘send’…

I am so glad that my computer program now has an autosave feature in it and that even when it crashes it retains most of what I have been doing. It’s needed because computers are still unreliable. It’s a shame that this is the case, but I am glad that the autosave feature exists.

We’re a bit like that. Like computers we are not always reliable. We crash. We let people down. We let God down. We sometimes (often) need to restart, and God’s grace is such that when we come to him and seek a fresh start he will do just that. And his grace is such that, even when we have crashed, he doesn’t make us start from scratch again. He has an autosave. We may need to do some work to help restore the damage or the hurt we have caused. We might need to look again at our attitudes and approaches and seek new ones. But the Jesus response is: “Go and sin no more”

*I wonder whether we Baptists are a bit like that when it comes to this coming Sunday. We have had Easter, then we had Ascension Day, last week it was Pentecost and now, isn’t there something important about this coming Sunday? I’m sure there is, but I can’t put my finger on it…

…Oh, yes. It’s Trinity Sunday. The Sunday when traditionally vicars get their curates to preach to explain the Trinity to their congregations so they don’t have to try (allegedly). If I am honest it’s a Sunday that I can’t remember observing much in our non-liturgical, non-conformist Baptist churches. I don’t think I have preached much specifically on the theme of ‘The Trinity’ even though I know that God is Three in One and that permeates my experience and understanding of God and (I hope) all my preaching.

The lectionary readings set for this Sunday are momentous. Yes I know all Scripture is momentous, but you know what I mean. I invite you to read these passages in their entirety, but I give you a small passage from each to whet your appetite:

Psalm 29 – “”Ascribe to the LORD the glory due to his name; worship the LORD in the splendour of his holiness.”

Romans 8.12–17 – “Therefore there is now no condemnation for those who are in Christ Jesus, because through Christ Jesus the law of the Spirit who gives life has set you free from the law of sin and death.”

John 3.1–17 – “For God so loved the world that he gave his One and only Son, that whoever believes in him shall not perish but have eternal life.”

By now you will probably have chosen what you are preaching on this Sunday. You may well have written your sermon. But give yourself a treat. Take the time to read those passages above and allow yourself to bask in them, to soak them up, to feel the weight of them, and to experience Father, Son and Spirit through them: the Father who commissions, sends and loves; the Son who comes and calls and dies because of that love; the Spirit who is given, who indwells, who leads. Don’t read them to explain the Trinity to your people, read them to have an encounter with him/them for yourself. Don’t read them to prepare a sermon, read them to prepare yourself. God the Three in One wants you to feel, hear and know how much they love you.

It’s all that spider’s fault.

There I was, sleeping enthusiastically, dreaming about something that I can’t remember, and being replenished, when suddenly the smoke alarm went off last night. I was very rudely awakened by the ear-piercing beeping and staggered out of bed and onto the landing where the alarm was located. It kept screaming at me for a few seconds and then going quiet, then resuming the alarming purpose for which it has been installed.

It was clear that there was no fire and there was no smoke. I suspected that some local wildlife had infiltrated the alarm and accidentally made the connection inside. I tried to open the cover but in my haste to find out what was happening I did not put on my glasses and was struggling to see where the catch was. I fumbled around for a while and, just as I was about to open the cover, the culprit emerged.

A tiny spider sheepishly sneaked out of the cover and scuttled across the top (or is it bottom) of the alarm. I flicked him away, confident that I had sorted out the problem. I then staggered back to bed and flopped back onto the pillow in the hope that I could resume where I had left off.

The good news was that the alarm did not sound again. It was clearly the spider who was the culprit (why did he choose the middle of the night rather than the day?).

The bad news was that I found it very difficult to get back to sleep again and so today am feeling a bit groggy as a result of spider-initiated-sleep deprivation.

It’s often the little things isn’t it? The seemingly insignificant things that can disrupt our life. The lack of change for the car park leaving you in the dilemma of whether to leave the car there to get some change so you can come back and buy a ticket, hoping that the inspector won’t call in your absence, or whether you drive off somewhere else. The phone that runs out of battery at a crucial time in a conversation, or when you need to make an important call. The bin bag that splits, distributing the smelly contents all over the kitchen floor, just as you were getting ready to leave the house, putting the rubbish out on the way. The spider that sneaks into the smoke alarm in the middle of the night. The piece of gossip that you pass on to someone ‘for prayer’ and leaves the subject feeling hurt and betrayed.