What is it about English mentality that we concentrate on people’s mistakes rather than successes?

Last night the English goalkeeper made a mistake and let in a goal which meant that England drew 1-1 with USA. The TV coverage then replayed the error time and time again, with the commentators making stupid references to the error every time the ball came anywhere near him. The first thing that the post-match review did was examine the error again. On the radio this morning there were more comments about the goalkeeping error than the goal scored. What about all the good things that happened in the match

I was impressed to hear how the England goalkeeper came out and admitted his mistake but said that he still wanted to play in future matches. It shows he has a strong character. It seems to me that we are not defined by our mistakes but how we respond to our mistakes reveals much more about us.

While I was a student in the late 1980s I led a session at our Christian Union on ‘forgiveness’. It is not that I am an expert on forgiveness, but I am someone who knows what it is like to be forgiven. As part of the session I suggested to people that it is important for us to vocalise ‘I forgive you’ so that the person we are forgiving knows that we forgive them. Afterwards one of the people there said that they would now change what they say from ‘You are forgiven’ to ‘I forgive you’ because they realised that the relationship with the other person is what has been damaged and needs repairing. It is not just that we are forgiven, we need to know that the person we have offended forgives us.

We all make mistakes. We have all done things that we regret. The wonderful thing about being a Christian is that we have the opportunity to admit our mistakes to God and be forgiven. We still have to live with the consequences of those mistakes and the impact that they may have on those around us, but the eternal dimension is more than ‘forgive and forget’, it’s ‘forgive and God wipes it off the record forever.’ The significance of Christ’s death for us is immense! It is not just that we are forgiven, but God tells us ‘I forgive you.’ 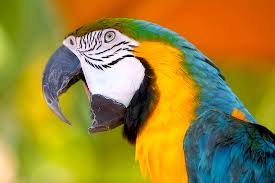 A woman bought a parrot for a pet. All the parrot did was treat her bad. It insulted her and every time she tried to pick it up, it would peck at her arm.

One day she got fed up with the parrot and as it was insulting her she picked it up, it continued with the insults..”you’re ugly! I can’t stand you!” and it pecked at her arm as she carried it. She opened the freezer door and threw him in and closed the door. From inside, the parrot was still going on for about 5 seconds and then it was suddenly quiet.

She thought, “Oh no, I killed it!” She open the door and the parrot just looked at her. She picked it up. Then the parrot said:

“I’m very sorry. I apologize for my bad behaviour and promise you there will be no more of that. From now on, I will be a respectful, obedient parrot.”

The parrot said “Thank you”. Then he said, “Can I ask you something?”

The parrot looked at the freezer and asked, “What did the Chicken do?”