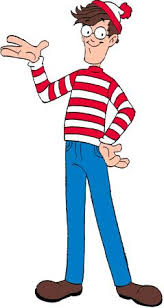 When I was in hospital my dad and my sister came all the way to London from South Devon to see me. I was so blessed just by that, but they also brought goodies to keep me sane and sweets to sustain me in the absence of decent food in the hospital. Among the goodies from my sister was a ‘Where’s Wally?’ book. If you don’t know the idea, there are a range of pictures with lots of people in them and you have to try to spot Wally among them. (In the USA he’s known as Waldo but it’s essentially the same).

A while ago I stumbled onto a website called ‘Where’s Jesus?’ which has a similar concept. There are photos of crowds and you have to identify Jesus in the crowd. Have a go on this photo, and click on the link above if you want to keep playing. (On the website just click on the face in the picture when you think you have found Jesus, that doesn’t work on my blog).

The pictures of Jesus are somewhat stylised – usually caucasian and with brown hair – like something off one of the pictures that used to adorn the walls in my old Sunday School with Jesus usually surrounded by children or animals. It’s amazing how when God made us in his image we want to make his Son in ours!

But the point I want to make is not about how we portray Jesus, but about where we find him. In the three years of his ministry on earth he was often found in the wrong places. He was talking with outcasts, touching untouchables, welcoming the unloved, affirming those who were rejected, eating and drinking with the wrong sort of people, befriending the lonely, breaking the religious rules, confounding the wise and inspiring the weak, executed as a criminal, buried in a borrowed tomb, and meeting a woman in a garden (when he should have been dead). He was often in the wrong places. At least as far as the religious people were concerned. As far as he was concerned he was in exactly the right place at exactly the right time, meeting exactly the right people and saying exactly the right thing.

What niggles at me is the answer to ‘Where’s Jesus?’ today. Yes we can say that he ascended into heaven, but all Christians have the Spirit of Jesus within us. Jesus is wherever we are, with us all the way. But since he is with us, how often today will he be seen talking with outcasts, touching untouchables, welcoming the unloved, affirming those who were rejected, eating and drinking with the wrong sort of people, befriending the lonely, breaking the religious rules, confounding the wise and inspiring the weak, executed as a criminal, buried in a borrowed tomb, and meeting a woman in a garden (when he should have been dead)?

A man was stumbling through the woods, totally drunk, when he came upon a preacher baptizing people in the river. He staggered into the water and bumped into the preacher.

The preacher turned around and was almost overcome by the smell of booze. Gathering his thoughts he asked the drunkard, “Are you ready to find Jesus?”

So the preacher grabbed him by the collar and dunked him in the water. He pulled him back up and asked the drunk, “Brother have you found Jesus?”

The drunk replied, “No, I haven’t found Jeshush.”

The preacher, shocked at the answer, dunked him into the water again but for a little longer this time. He again pulled him out of the water and asked, “Have you found Jesus, my brother?”

The drunk again answered, “No, I shtill haven’t found Jeshush.”

By this time, the preacher was at his wit’s end so he dunked the drunk in the water again… but this time he held him down for about 30 seconds.

When the drunk began kicking his arms and legs, the preacher pulled him up.

The preacher asked the drunk again, “For the love of God, have you found Jesus?”

The drunk wiped his eyes and caught his breath. Then slowly and deliberately he said to the preacher, “Are you shure thish ish where he fell in?”

One thought on “Where’s Jesus?”