When I was little we lived in North Devon. My Dad was Headmaster of a nearby village school in Highampton and we lived in a (rented) thatched cottage on the outskirts of a village called Sheepwash. No, it’s not a made up name. It’s a lovely picturesque village that has often been used as the backdrop for TV dramas set in the countryside. 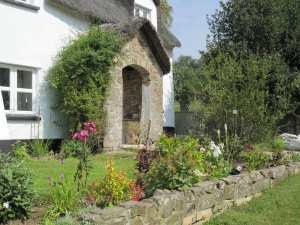 My memories of that part of my life are pretty hazy. I was only a toddler, after all. I have been told that I swore. My sister had been told off for saying something she had heard (rhymes with ‘rugger’). She had found me in my cot and had taught me the new word. Mum and Dad found her saying, “What is it I mustn’t say?” and me bouncing up and down in my cot repeating the word enthusiastically!

I do remember Mr Trace, though. He was the local farmer from whom we rented the cottage and he semi-adopted me. He used to call me ‘McTavish’ for some reason I have never discovered. I couldn’t say that so would call myself ‘Tabish’. I used to accompany Mr Trace around his farm in his Landrover. I also used to ‘help’ him on the farm.

I used to accompany him to market on occasions – at Black Torrington. It seems that each time I went I would come back with a new toy tractor. Tractors were (and still are) cool. I would spend hours lying on my side ‘brumming’ the tractors back and forth until I wore them out.

I have been told that I also caused trouble. On one occasion Mr Trace left me in the cab of his Landrover while he went to check something and when he came back he could see two chubby little legs sticking up. I had managed to slide head-first through the steering wheel and got myself stuck. On another occasion I apparently shorted out the Landrover by sticking my fingers in the socket for power tools.

Why all the reminiscing? I am not sure what triggered it, but I do know that I treasure that time with Mr Trace. He was so kind, patient, generous and I looked up to him (literally and figuratively). He was a significant person in my formative years. I am sure he did not think of himself in that way. I am sure he just thought of himself as an ordinary man.

We have the privilege of being able to do that too. Not only for children and young people, although that is a massive privilege and responsibility. But for those who are young in the faith. Whether we like it or not, whether we realise it or not, other believers are looking at us and basing their experience and image of Jesus on us.

They need our patience when they make mistakes. They need our encouragement. They need opportunities to use the gifts that they have and grow in their faith. We all need to be able to look at our fellow followers of Jesus and see glimpses of him to we can seek to emulate.

Be blessed. Be a blessing.