Let me start by saying that I love Christmas, and I love Colchester Baptist Church – they are wonderful. This is NOT a complaint it’s an observation and a reflection. If you sense any complaining or self-pity in this bloggage it has sneaked in without permission. ‘Bah, humbug’ is banned!

People sometimes say to me that Christmas must be the busiest time of the year for a Minister. Yes it is busy and yes there are extra things to do, but part of me wants to say ‘no’ because it’s not as if I am sitting around twiddling my thumbs for the rest of the year (cue jokes about only working on Sundays…). I also want to say that if there is any extra busyness it’s no more than lots of other people experience at this time of year. And lots of other people in the church are also working their socks off in a voluntary capacity (which is why they need new ones for Christmas). And I want to say that I love it.

Before I was called to this church I worked at our Baptist Union’s office in Didcot. I loved what I did there, but at Christmas I missed being a Minister in a local church. It was not always specific things I missed (like all the lunches) – it was simply being among people as their Minister at this incredibly special time. I love it.

And each year there are new insights from the age-old story. Each year I am captivated by the realisation that the baby in the manger was God with us. This morning I was blessed by watching this wonderful video on YouTube, especially the ‘twist’.

This year some of my pondering has generated the following story, which I shared with one of our parent and toddler groups… 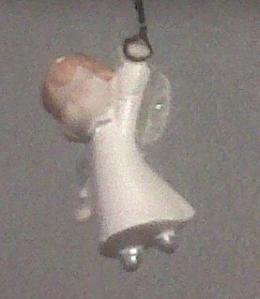 Heaven was normally a calm, quiet place. It was peaceful, gentle and lovely. The angels would talk to each other in gentle whispers because it was so quiet.

Except for Nora. She could not speak quietly. If one of the other angels whispered, “Good morning Nora,” she would respond in a loud voice, “GOOD MORNING!”

If one of the angels whispered, “How are you?” Nora would bellow, “I’M WONDERFUL THANK YOU, HOW ARE YOU?”

And when the angels suggested that Nora should speak more softly she would shout, “I’M SPEAKING AS SOFTLY AS I CAN!”

The other angels called her Noisy Nora and that made her a bit sad. She wanted to be quiet but didn’t know how.

One day Nora heard that they were holding auditions for a very special choir of angels. She was very excited and went along. Thousands of angels were singing in sweet harmony: “Glory to God in the highest and peace on earth to everyone!” It was a lovely, inspiring, melodic sound.

When it was Nora’s turn she tried her hardest. But instead of a gentle harmony she sang at the top of her voice, “GLORY TO GOD IN THE HIGHEST AND PEACE ON EARTH TO EVERYONE!”

“I’m very sorry Nora” say the angel choirmaster, “You’re too noisy. We can’t hear anyone else.”

Nora was really sad. She knew that the choir were practising for the most exciting moment since God had said, “Let there be light!” and she couldn’t be a part of it.

She went and sat down on a small cloud and cried.

She was still crying when she noticed that it had got brighter around her. She looked up and saw the Kindest Face.

“HELLO!” she said loudly, instantly feeling guilty about speaking so loudly to Him.

“I’ve got an important job for you,” said the Kindest Voice. And He whispered in her ear to tell her what He wanted her to do.

The next day the massive choir was ready, lined up in the darkness, waiting to sing their special song in honour of the special baby. They all waited for their cue. Then they noticed Nora walk out in front of them and step out from behind the night curtain in front of a group of startled shepherds.

“DON’T BE AFRAID!” shouted Nora in her loud voice, so everyone could hear, “I’VE GOT GOOD NEWS FOR YOU. IT’S NEWS THAT WILL CHANGE THE WORLD FOREVER! A SPECIAL BABY HAS JUST BEEN BORN IN BETHLEHEM. GOD’S COME INTO THE WORLD AND YOU CAN FIND HIM WRAPPED UP WARM AND LYING IN A MANGER!”

That was the cue for the rest of the angels. The night curtain was raised and the massed choir sang their special song: “Glory to God in the highest and peace on earth to everyone.”

The night curtain came back down and the angel choir went back to heaven. Nora peeped through and watched as the shepherds faces shone and they hurried off down the hill into the village to find the baby.

When Nora got back to heaven the rest of the angels cheered and shouted and made such a fuss of her because she had done such an amazing job with her loud voice. And Nora could see the Kindest Face beaming at her.

She was so pleased that for the first time in her life she whispered, “Thank you.”

*If you like the story and want to use it, feel free. If you fancy giving me a credit that would be nice.

One thought on “Yay for Christmas!”