A man sat down to pray. He tried to imagine what God was like. He thought of God’s creativity: he considered the vastness of the Universe and the tiniest sub-atomic particles. He thought of God’s love: he considered Easter and what that says about the depth of God’s love, grace and forgiveness. He considered things what make God smile: a child learning to walk and an old man struggling to his feet to give his seat up on the tube for a pregnant woman. He pondered these and other things for a long time.

A woman got up in the morning. “Good morning Lord, what are we going to do today?” she asked as she hurried along the street to catch the bus to work. 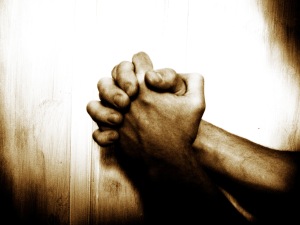 A young child sat at the dinner table looking despondently at the broccoli and cabbage alongside a piece of pie. She did not like much on what was on her plate. She prayed with feeling: “For what we are about to receive may the Lord MAKE US truly thankful. Amen.”

A cleaner had been working all day in the hospital. She had cleaned thoroughly under beds, in hard-to-reach corners, on top of cabinets and in the less pleasant areas of the hospital. As she cleaned she hummed songs and hymns that she had sung in church recently.

A young woman was checking out websites of charities that were working with people who had suffered injustice. It moved her deeply to read of the plight of people who were trafficked, enslaved, kept in poverty, unable to express their beliefs and so much more. “Why do people do this to one another?” she thought.

A man was playing golf with his friends. He was not having a good day. His fourth golf ball seemed to be as repelled by the greens and attracted to the rough as his previous (lost) three. He smiled as finally he hit a shot that went straight and landed on the green. “Hallelujah!” he muttered just loud enough for his friends to hear.

A woman was in her own little world. It was not by choice. Her illness had robbed her of the ability to recall people, events, precious memories and so much more. Yet when she gathered with the others in the nursing home for their weekly ‘service’ she could recall and sing some of the hymns she had sung throughout her life and for a moment the veil was lifted.

Which of these was a proper prayer and which do you think was most effective? Which one did God hear?

If you feel that those are not valid questions, I agree with you. So how do you pray?