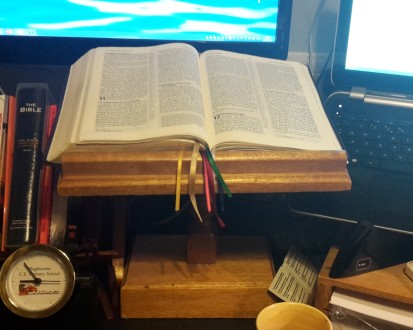 This is a book stand which my Dad made for me a number of years ago. I wanted a table top stand for my Bible so I could have it open in front of me while I was working. It fulfils that purpose brilliantly.

In my previous role as a Minister in a local church I took the stand into the church and used it during Communion services to elevate my Bible and books to make it easier to read them and also to make more space on the table for the bread and wine. It lived in the church for the six and a half years I was there. When it came to me collecting my personal belongings when I left I remembered this stand and went to collect it. As I stood at the table, ready to pick it up, I found myself in something of a quandary.

It was my stand, it was made for me, it was made by my Dad. I had every right to take it back, it had only been available to the church while I was their Minister. But it had been in use in the church for six and a half years. It was useful. It wasn’t something I had felt the need to use in my study for those years. And if I took it, would lots of people in the church wonder who had taken their bible stand, since they would not have known where it came from (it just appeared one week without any announcement or fanfare)?

In the end, as you will have surmised, I decided that I wanted to take it with me. I decided that while it had been more useful while I was Minister at the church to use it for Communion services it would now be more useful to me in my study elevating my Bible so I could refer to it while preparing – the original purpose for which it was made, and the personal dimension of who made it for me was important to me. But as I was taking it with me I could not help but feel a bit selfish.

As I sit in my study now, with the view in the photo above in front of me, I reflect not only on my bible stand but more widely on questions of permanence. Six and a half years is a long time (2373 days) and it is easy to see how some people would have regarded the bible stand as a permanent fixture. They would have got used to it. They would have got used to using it. But it was only on loan. How often do we think that the things we have, the things we do, the people around us and even our very life are permanent? They will always be there. Perhaps that is why we mourn their loss so deeply when they are no longer there – stolen, destroyed, broken, worn out, moved away or even dead. What we had thought to be permanent has been revealed as temporary.

So is anything in your life permanent? This is not meant to be depressing. Because there is permanence to which we can anchor our temporary life. God’s eternal nature is a permanent fixture that transcends time and space. The Bible tells us that in the opening lines: ‘in the beginning, God…’ presupposes God’s existence before the time/space continuum in which we exist began. To ask ‘who created God’ is to make him temporary and temporal. It is to confine him to our time/space continuum in which we are able to discern prior causes and only experience things in a linear way (time only moves in one direction, despite what the Doctor may tell us about it being wibbly wobbly timey wimey stuff). God is beyond time, but is also within time so that we can experience him like a boat being tossed around on a stormy sea yet tied safely to a mooring buoy fixed to the sea bed.

But the Christmas narrative also reminds us that God is not just an anchor, he has made it possible for us to be with him beyond time when our temporary temporal existence ceases.

Christ by highest heav’n adored
Christ the everlasting Lord!
Late in time behold Him come
Offspring of a Virgin’s womb
Veiled in flesh the Godhead see
Hail the incarnate Deity
Pleased as man with man to dwell
Jesus, our Emmanuel
Hark! The herald angels sing
“Glory to the newborn King!”

Hail the heav’n-born Prince of Peace!
Hail the Son of Righteousness!
Light and life to all He brings
Ris’n with healing in His wings
Mild He lays His glory by
Born that man no more may die
Born to raise the sons of earth
Born to give them second birth
Hark! The herald angels sing
“Glory to the newborn King!”

If God is that time-transcending permanence and invites us to share in it, what difference does that make to the way we view the stuff and people that are part of temporary temporal existence, and what difference does it make to our desire that other people might experience that too? Our life may be on loan, but we don’t have to be alone. Ever. Forever.