There’s been a fair amount of publicity given to Stephen Fry’s impassioned response to the question, “Suppose it’s all true, and you walk up to the pearly gates, and are confronted by God, what will Stephen Fry say to him, her, or it?” The question was posed by Gabriel Byrne in a series on Irish television The Meaning of Life.

Stephen Fry’s response (as an atheist) was passionate and profound: “I’d say, bone cancer in children? What’s that about? How dare you? How dare you create a world to which there is such misery that is not our fault? It’s not right, it’s utterly, utterly evil. Why should I respect a capricious, mean-minded, stupid God who creates a world that is so full of injustice and pain. That’s what I would say.” 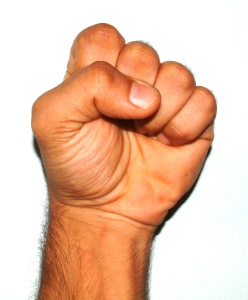 There have been a lot of responses to this. How do you respond? Do you object to his language to describe God? Do you wonder what gives him the right to sit in judgment on God? I have a degree of sympathy with him, if I am honest.

Once again I sense the gathering of cyberstones ready to pound me into submission so before you lob them at me, let me explain.

I have sympathy because if God is like that then I agree with Stephen Fry. There is dissonance (to put it mildly) with the “and it was good” of creation isn’t there? But I would also want to point out that God is not entirely responsible for the world as it is today. We have a degree of responsibility too. And we also have to accept that in order to give us genuine freedom of choice God has chosen to limit his involvement in this world.

I have sympathy too because we find that view in the Bible. Even today in my reading from 1 Kings 17 we find it. Elijah had been a houseguest of a widow and her son:

17 Some time later the son of the woman who owned the house became ill. He grew worse and worse, and finally stopped breathing. 18 She said to Elijah, ‘What do you have against me, man of God? Did you come to remind me of my sin and kill my son?’

22 The Lord heard Elijah’s cry, and the boy’s life returned to him, and he lived. 23 Elijah picked up the child and carried him down from the room into the house. He gave him to his mother and said, ‘Look, your son is alive!’

Doesn’t that make you want to ask God some questions? It certainly got Elijah, one of the great prophets, hot under the collar of his cloak. Look at the words I highlighted in red. The widow was grieving and blamed God’s representative and he in turn took it out on God. I think you could paraphrase it as, “What sort of God are you?”

You might answer that he is “The sort of God who cares about widows.” But he doesn’t always, does he?