When our children were very young I started something that became a family ‘thing’. I was messing around with them and, resting my head on top of one of our son’s head, I jiggled my jaw back and forth. It made him laugh so I did it again. Our daughter didn’t see what I had done but she wanted it done too, so I jiggled my jaw on top of her head too. But neither of them saw exactly what I was doing. It felt funny to them but they couldn’t work out what I was doing. 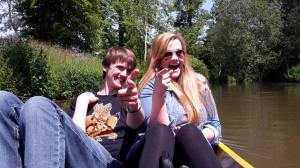 old enough to know the ‘thing’

When this had grown into a family ‘thing’ I told them that I would tell them the secret when they were 18 and not before. And so the ‘thing’ kept going. When our son reached 18 he remembered about it and asked for the secret so I told him on condition that he couldn’t tell our daughter because she was not yet 18. She turned 18 at the end of June this year and earlier this week she suddenly remembered that she was now entitled to know the secret of the ‘thing’.

I showed her how I was merely jiggling my jaw from side to side on top of her head. She couldn’t believe that’s all it was. It was the family ‘thing’ and now she knew (she laughed hard when she found out the secret) but there was also a bit of a disappointment that it was so simple. But there’s now no more family ‘thing’.

Incidentally that’s why magicians don’t tell you how we do our illusions: if you found out how illusion was performed you would probably be disappointed and the illusion would be ruined for you because now you would not see and enjoy the performance of the illusion you would just be thinking about how it is done.

But sometimes it’s best to burst the balloon because sometimes things are blown up out of all proportion and become much bigger than they need to. That disagreement that escalated to an argument and became a row and then led to the breakdown of a friendship. That upset that became hurt feelings that festered into resentment and became septic hatred. That misunderstanding that was unresolved and dug itself into entrenchment that ossified into confrontational positions.

These things can be prevented with a good dose of Christlike love, grace, forgiveness, humility and gentleness. These characteristics are not something we can generate ourselves, but God’s Spirit blesses us with them and nurtures them in response to our desire for them. They are indominatable and irresistible. I think that’s what Paul meant when he wrote to the churches in the region of Galatia:

22 But the fruit of the Spirit is love, joy, peace, forbearance, kindness, goodness, faithfulness, 23 gentleness and self-control. Against such things there is no law. 24 Those who belong to Christ Jesus have crucified the flesh with its passions and desires. 25 Since we live by the Spirit, let us keep in step with the Spirit. 26 Let us not become conceited, provoking and envying each other. (Galatians 5:22-26)

And these things can help to deflate the balloon (less messy than bursting it but non-alliterative). It starts with a recognition of the value of what has been lost: that a friendship is more important than being right; that a relationship is more valuable than hatred; that collaboration is better than confrontation. And that recognition leads to action, to someone making the first move towards reconciliation. Which also points me back to my recent series on the atonement – God loves us than we can ever know and has made the first move towards reconciliation.

One thought on “out of all proportion”