Another ‘ian’ today. Tomorrow I plan to reflect more on yesterday’s awesomeness.

Being a Christian is like being Dickensian. Someone or something that is reminiscent of Charles Dickens’ Victorian novels or the characters portrayed within them is described as being Dickensian.

The fruit of the Spirit is love, joy, peace, patience, kindness, goodness, faithfulness, gentleness and self-control. Against such things there is no law. Those who belong to Christ Jesus have crucified the sinful nature with its passions and desires. Since we live by the Spirit, let us keep in step with the Spirit. (Galatians 5:22-25)

If you look at the narrative accounts of Jesus’ life you will see those characteristics in him in abundance. Look at the way he treated those who were on the fringes of society. Look at the way he treated those who were regarded as unlovable by the self-righteous elite of his day. Look at the way he gently and patiently taught people what God really wanted and offered in him. Look at the way he kept to his mission and refused to be distracted from it. In fact, as a challenge for you, why not commit yourself to do just that and read one of the gospel narratives through in this term. Read a chapter a day and you will be done within a month. I did just that this summer – I read through Luke’s gospel a day at a time and was reminded of aspects of Jesus’ character that I had forgotten and neglected. I found myself drawn more closely to want to emulate him.

To be a Christian is to be reminiscent of Jesus Christ, to show these characteristics more and more. One of the aspirations of followers of Jesus is that we would be more like him. It is not something we can do on our own. It is not something we can do through any sort of religious self-help groups or therapy. This is something that God does within us as we ask and allow him to. It is one of the things that the Holy Spirit does with us. We start to show the family likeness.

Groucho Marx once said, “I don’t want to belong to any club that would have me as a member.” That is almost profound!

That old lady knew that part of what it means to be a Christian is to be someone who is known as a follower of Jesus. Our allegiance is with him. Nothing can change that. We are like Olympians because we are part of his movement.

Another ‘ian’ for you today from the talk I did on ‘What is a Christian?’.

Donald MacDonald from the Isle of Skye was admitted to Essex University, and was now living in his first year of residence there. His clan was very excited that one of their own had made it into the upper class of education, but were concerned how he’d do in “that strange land.” After the first month, his mother came to visit, with reinforcements of whiskey and oatmeal.
“And how do you find the English students, Donald?” she asked.
“Oh, Mother,” he replied, shaking his head sadly, “they’re such terrible, noisy people: The one on that side keeps banging his head against the wall, and won’t stop; and the one on the other side screams and screams and screams away into the night.”
“But Donald! How do you manage with those dreadful noisy English neighbours?”
“Well, mother, I just ignore ’em. I just stay here quietly, playing my bagpipes…”

Being a Christian is like being a musician. The ‘-ian’ suffix here shows what (or to whom) we relate. A musician is called a musician because their activities relate to music. We are called Christians because what we do relates to Jesus Christ. Being a Christian is not simply an affirmation of a set of beliefs. It is about a relationship with God.
There is an advert that used to be shown on German Television that a German friend sent me a while ago. You can see it by clicking on the link here. Clear communication is vital for us. And at the heart of any good relationship is clear communication. We know that friendships and relationships only work because we talk openly and honestly with each other and we listen to each other. I used to be a lawyer and in every divorce case I dealt with you can trace many of the problems in the relationship to a failure to communicate – to speak openly and honestly and to listen to each other.
So it is for us as Christians in a relationship with God. We need to communicate clearly with him. That is why praying and reading the Bible are so important – they are the primary means by which we speak with God and can listen to him. Praying and reading the Bible are not meant to be chores, something to be done because we have to, or something to be done quickly before we get on with the rest of our life. If we rush these things, if we give them the worst part of the day we can be sure that our relationship with God will suffer and we should not be surprised if it starts to feel that we are out of touch with God.
Praying is something we can do at any time. Do you chat with God? Do you offer prayers to him when you see someone in need? I am sure that he would like us to consider praying as natural as sending text messages to our friends or keeping in touch with them on social networking websites.
Christians are like musicians – it is about relating to God.

I recently was asked to do a talk on ‘What is a Christian?’ I decided that, among other things, a Christian is like a  martian.

[pause longer for the penny to drop] 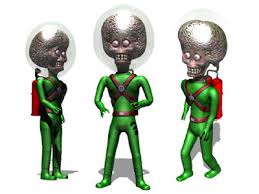 For those who have not quite got the message, it’s not because people think we are weird, have green skin or will suck people’s brains out. It’s about origins. Martians are called Martians because their origins are in Mars. We are Christians because our spiritual origins are in Christ.

What does that mean? It means we are adopted into his family. It means he is the source of our faith and salvation. It means that we owe him everything.

How does that affect me? It should lead me to live with an attitude of gratitude. ‘Thank you’ ought to be near the top of my list of words in my praying.


Some Martians were cruising through space when they suddenly got the urge to try some Earth food. They had no local currency so they decided to steal some Mars Bars from the local shop. They slipped into the shop, while the shopkeeper wasn’t looking and slipped out again unnoticed.
“Stop! You never paid for those!” shouted the shopkeeper.
The Martians dropped the bars and ran. They hopped on their bike, and zoomed back to the mothership. Their mother was furious with them: “You should be ashamed of yourselves. You couldn’t even take a few Mars Bars from an Earthshop without getting caught. What happened?”
“I don’t know how the shopkeeper saw us,” said one of the young Martians, “She must have eyes in the front of her head!”